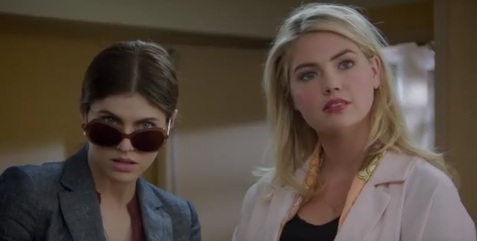 The two actresses play roomates and best friends who decide to take a trip to Florida, after losing their jobs. On the way, they have a layover in St. Louis and become the worst enemies because of a guy (Matt Barr) they are both attracted to.

The trailer features Daddario and Upton embarking on a journey to Florida that doesn’t get to begin because of
the layover in St. Louis (due to a hurricane). On the plane, they meet a hot guy, Ryan, that has his seat between them, and start fighting for his attention. Their rivalry reaches unexpected heights, also literally. From showing off their bodies in sexy swimsuits and their dancing skills in a night club to more annoying and quite dangerous pranks, the two young women prove they are willing to do anything in order to get their hands on Ryan.

The Layover, distributed by Vertical Entertainment and DIRECTV, arrives on DIRECTV on August 3 and in theaters on September 1.