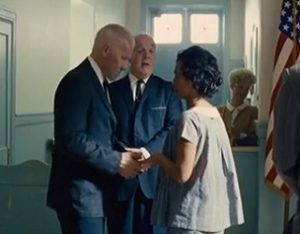 Loving is an upcoming British-American drama based on a real-life story.
Directed by Jeff Nichols, the film follows Mildred Jeter and Richard Loving, an interracial couple sentenced to prison in 1958, in Virginia, for having gotten married. Their legal proceedings against the state of Virginia led to the change of US Constitution, as in 1967 the Supreme Court decided that interracial marriages should no longer be prohibited.
With Joel Edgerton and Ruth Negga playing the titles roles, the movie is due out on November 4. While the soundtrack music is by David Wingo, the song playing in the background of the first official trailer is “Ride To Death” by Carter Burwell.