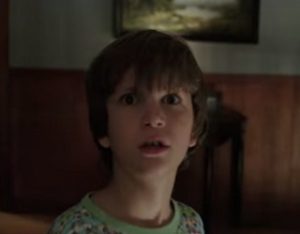 Lights Out, an upcoming horror film directed by David F. Sandberg, follows a family (mother, her son and her daughter) that see a dead woman when the lights are turned off.
The latter, named Diana, was a childhood friend of the kids mother, Sophie, who has to explain now to her 9-year-old boy and her older daughter what happened decades ago.
The movie is scheduled to hit US theaters on July 22.
The song playing in the trailer is “Apollo (For What It’s Worth)”, performed by Malia J feat. Think Up Anger.